The NICU World
IMMATURE LUNGS
<
>
There are 5 different stages of lung development that occur during fetal life: Embryonic (~week 4-8), Pseudoglandular (~week 5-17), Canalicular (~week 16-26), Saccular (~week 24-37), Alveolar (~week 36 to several years after delivery).  Your baby starts out with the formation of the large airways: the trachea which is what starts at the top of your neck and then travels down into your chest where is splits into 2 branches, called bronchi, that go into the left and right lungs.  Then each of these bronchi continue to branch into smaller and smaller airways (this mainly occurs in the pseudoglandular and canalicular stages) and eventually at the end of the smallest airways, little air sacs are formed called alveoli.  Alveoli are what are responsible for exchanging gases most importantly oxygen and carbon dioxide.
​
What type of breathing machines are there to help my baby breathe?

Low Flow Nasal Cannula
This type of cannula is a thin plastic tube that delivers oxygen directly into the nose through two small prongs.  This type of device is used when only a small amount of oxygen is required.

High Flow Nasal Cannula
This type of cannula is used when a baby need some pressure and maybe oxygen as well.  It looks very similar to a low flow nasal cannula.  It is used in babies who usually breath all on their own but may occasionally have apneas, or pauses in their breathing.

​CPAP/NIMV
​Picture of a baby with a mask in place that can deliver CPAP (continuous positive airway pressure) or NIMV (noninvasive mechanical ventilation.  This type of breathing help is used when babies can do some of the breathing on their own but not all of it.  The machine does some of the work for them, specifically helping them inhale with each breath they take. 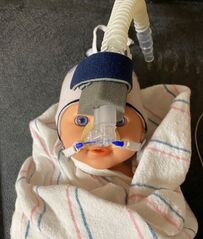 Mechanical Ventilation
Picture of a baby with a breathing tube also known as an endotracheal tube (ETT for short).  When babies are born very premature (<28 weeks gestation) there is an increased risk that your baby will need breathing support in the form of an ETT which is connected to tube that is then connected to the ventilator or breathing machine.  This helps babies breath who are not able to do it on their own.  It can also provide oxygen if needed.
​
Respiratory Distress Syndrome (RDS)
When babies are born premature, their lungs are not fully developed which can create problems with their breathing.  Gas exchange occurs in the alveoli and preterm infants, depending on how premature, do not have many alveoli.  This can cause several problems the most important of which is being able to get oxygen into their bodies and get rid of carbon dioxide.  In order to be able to exchange these gases in the alveoli, they need to be open and not collapsed down.  One way to think about this is envisioning the lungs as a bunch of grapes and the alveoli are the grapes.  In order to effectively exchange gases the grapes need to be big and round and if they turn into raisins then they can no longer function well.  How babies keep their alveoli big and round is by a protein called surfactant which is made by these alveoli.  However, premature babies don't have the same number of alveoli as a term baby and they don't make enough surfactant.

Luckily, modern medicine has found a way to make surfactant so that it can be given to babies after they are born if they need it.  When babies require surfactant after they are born, they are diagnosed with something called respiratory distress syndrome or RDS for short.  This simply means that your baby did not make enough surfactant on their own to keep their alveoli open.  Some babies only need 1 dose of surfactant, others may require more than 1.  This is usually done within the first few days of life.  Surfactant is given to babies through a breathing tube (endotracheal tube or ETT for short).  Some NICUs are giving surfactant through something called an laryngeal mask airway (LMA) which is less invasive that an ETT because the LMA just sits in the back of their mouth whereas the ETT has to go through the vocal cords into the airway.

Pneumothorax
This can happen when there is damage to the lung tissue and air leaks out from the airways in the lungs into the space between the outside of the lungs and the chest wall.  They can range from small to very large pneumothoraces.  The larger they are, the more they will push on and compress the lung causing it to not work well.  This can cause your baby to have problems breathing.  To fix this, there is a procedure called a thoracentesis.  This is where a small needle is inserted into the air space that is causing the problem and this enables that air to be taken out.  Once all the air is removed, the needle is taken out.  Usually this is all that needs to be done.  However, if the air re-accumulates, then your baby may need a small flexible tube inserted into that space, called a chest tube, so that the air can be taken out on a continuous basis until the lung tissue can heal and stop leaking air into that space.  Often a chest tube will stay in for a few days.
​

Long term complications
​Chronic Lung Disease (CLD)/Bronchopulmonary Dysplasia (BPD)
Babies that are born very premature and have breathing problems requiring them to need support by either a breathing tube or by CPAP or other support device can develop BPD, sometimes also called chronic lung disease.  This is very common for these babies to have this diagnosis.  What is means is that your baby is continuing to need some type of support and/or oxygen after 36 weeks corrected gestation.  Most babies do very well and don't need to go home on any respiratory support, but some still need oxygen and can be discharged with a low flow nasal cannula that can give them oxygen.  Babies lungs are still growing and developing even after they reach term age which means that their lungs can grow and develop over the first few years of their life and grow out of their breathing problems.  The best way to ensure that their lungs continue to grow in the healthiest way possible is to keep them away from second hand smoke, avoid visiting many people who will be in close contact with the baby to limit the risk of infections like colds, and make sure your baby stays up to date with their vaccines.  If your baby who was born premature, even if they didn't need oxygen going home, they are more likely to have severe complications from a typical cold or flu than babies not born premature or older children or adults. 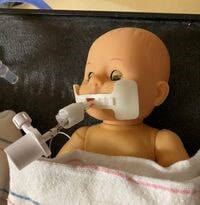